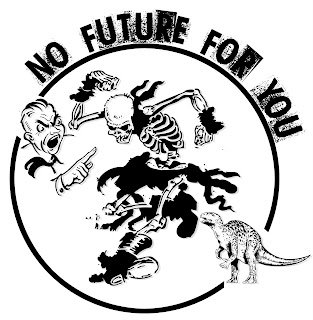 Senile: /see-nahy-ul/
Having or showing the weaknesses or diseases of old age, esp. a loss of mental faculties.

Here’s how it went down.

Political unrest in the Middle East drove up fuel prices and the cost of living.  A protracted war against a seemingly undefeatable indigenous guerilla force sucked the national coffers dry. A gutless democrat president was steamrolled by corporatist republicans and downturns in housing and manufacturing dragged the economy into recession and sent unemployment to record highs. And Ronald Reagan was elected President.

It was in that atmosphere of post-Vietnam imperial decline that punk came of age. Nihilism was the message. The government and society had sold out the American people. Older hippies were well down the path toward yuppiedom, so punks chose to start their own alternative culture. Punk was based not on the collectivist optimism of the psychedelic generation, but more on a vision of a DIY culture rising from the ashes of  mundane mainsteam middle-America. Punk bands booked their own tours, pressed their own records, designed their own flyers. Punk artists took to the streets or started their own galleries. Punk writers published their own ‘zines. A subculture grew and punks flourished, without the permission of the growing corporatocracy. Punk was the last best hope for a life outside the establishment system.

In the 90’s, many punks, now in their 30’s, sadly but not unexpectedly took the opportunity to sneak back into the middle class from whence they came. The Clintonian neo-liberal tech-boom train was leaving the station, and “alternative” college rock enthusiasts rushed to get on board, following their hippie elders into the world of khaki pants and retirement accounts. The new breed of assembly line worker was being born. Not on the factory floor-  oh no, President Clinton made sure that those jobs went overseas- but rather in the climate controlled cubicles of the former punk outposts like San Francisco, Seattle and Lower Manhattan. But this assembly line is better! You could listen to your favorite punk tunes (through headphones), wear your Chuck Taylor Allstars (to signify that you are “thinking outside of the box”) AND the cafeteria has organic and vegetarian options!

Ex-punks had babies, and brought children into a future that just a few years before they thought would not exist. Back then, they were thrashing in a pit while the Circle Jerks sang “ I went to see a rabbi, but despite his advise, I want an operation I will not father life! Operation, operation, snip & tie, snip & tie!” Suddenly they are getting their musical cues from the bumper music on “All Things Considered” while they haul a van full of brats with food allergies to be coached by some stay-at-home dad, whose liberal arts college degree in humanities and ability to kick a soccer ball has drawn him the short straw while his formerly pink-haired, pierced-nosed wife (with an MBA) drinks single malt scotch in a hotel bar at a conference in Phoenix.

Through it all, a few aging punks keep the faith. They missed the train, or fell off the train, or in many cases, the train ran them over. They were born without the business gene, or they just never gave a shit about money. Some would sell out if they could, but addiction, depression, psychosis or other mental or personality disorders don’t allow it. The DIY spirit keeps them alive.  They do for themselves. They still know how to survive without the system promoting their own shit, selling their own shit, scraping by. Times are tough again, but they still know the ropes.

Now, in the era of “austerity,” jobs are scarce and the establishment is once again selling out the American people. But this time there is no youth movement in sight. Surveillance society and digital culture has apparently stolen the punk babies souls. They need to be shown the way. They can’t learn it all from reading Maximum Rock and Roll, after all.  It’s time for old punks to rediscover their roots. To re-activate. To take back the mantle of nihilism and rage like there is no tomorrow. What is there to lose? Jump off the train. Before it’s too late, before the anti-depressants, craft-brewed beer and vegan cupcakes take away the last of your will to fight. The punk generation needs to go “senihl”.

Political unrest in the Middle East drove up fuel prices and the cost of living.  A protracted war against a seemingly undefeatable indigenous guerilla force sucked the national coffers dry. A gutless democrat president was steamrolled by corporatist republicans and downturns in housing and manufacturing dragged the economy into recession and sent unemployment to record highs. And ??? will be elected President.

Time to dig out the Circle Jerks records.
-------------
Want to read more? Check out the free paper at your local hipster hangout. Not there? We can send you a stack to distribute to local coffee houses, book and record shops.  Email us at: obmag@feral-tech.com.
Posted by Ricardo Feral at 5:38 PM

Visit obsolete-press.com to get our books, magazines and swag!

You can read back issues online for free at Scribd. If you enjoy what you read, please considering making a small donation to keep us going.

Are you a bitcoin user?

Help bitcoin and Obsolete! grow by using bitcoin! Contact us to make a payment.